For years I really could never understand “alternative” bicycles. You see, I had a type when it came to bikes, and my idea of a proper bicycle was one that had large tires, full fenders, racks, and lots and lots of gears. A proper bike had to have drop bars, because otherwise how would you move your hands around to reduce fatigue? A proper bike definitely had a dynamo hub and a good set of lights paired with it. 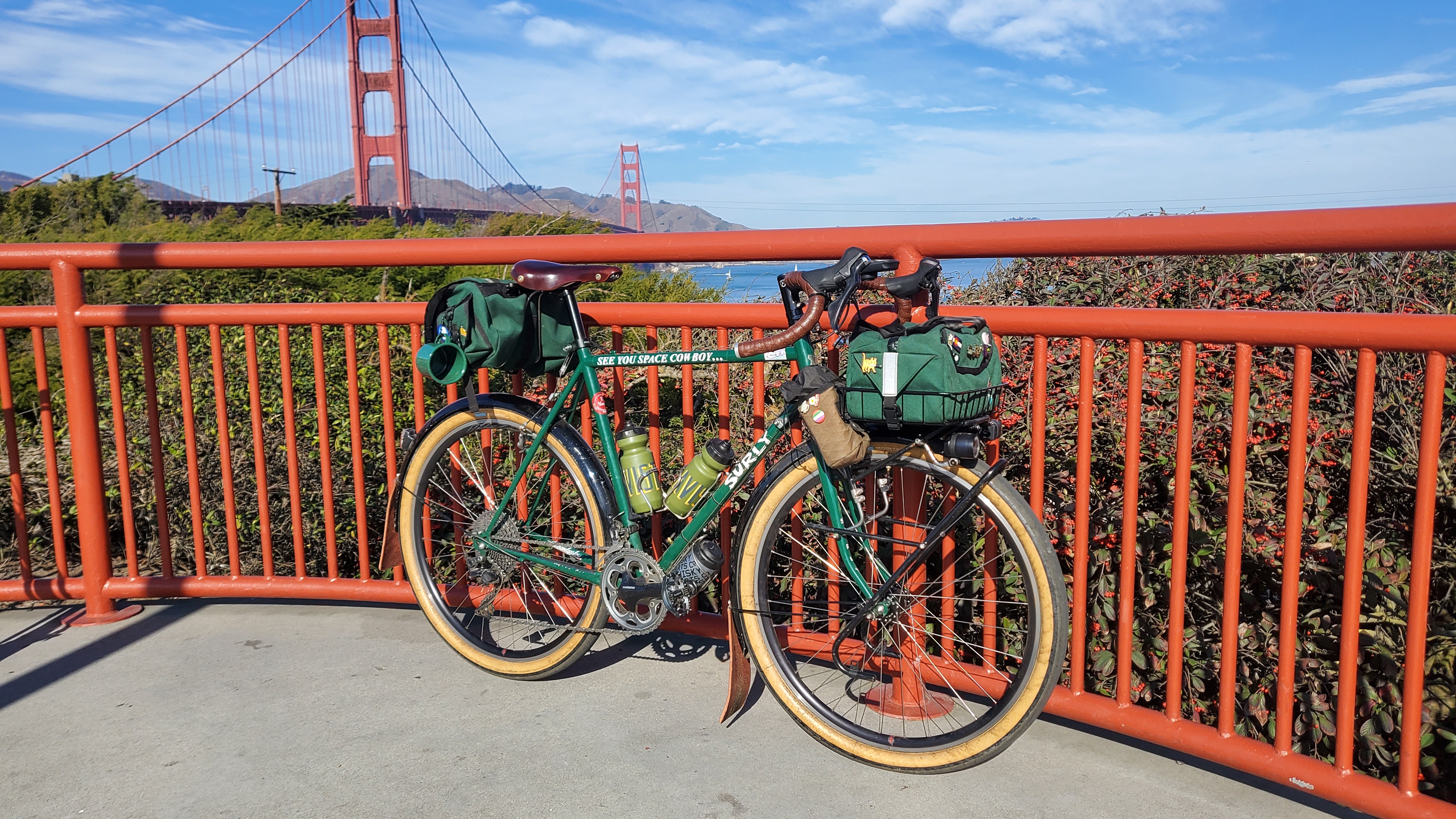 The past few years have felt like a full on assault on my tastes in bicycles. There are all these 14-20" folding electric bikes now that just look unbelievably goofy (and offend my sense of bicycle snobbery) with zero thought put to fit. They come complete with 4"+ tires that just look awful to ride, likely impossible to service hinges and other core components, not to mention about as heavy as an actual motorcycle.

I understand why these models have become popular. I know there are people, especially in the city of San Francisco, for whom these bikes make a difference in a reliable commute to work, helping make them money as a delivery person, and any number of major life improvements these affordable, fast(ish,) motorized bikes have brought with them.

I welcome any new rider that is taking part in riding these streets because we win with numbers, and they are driving the much needed infrastructure changes and funding we are finally seeing. However, some of the worst riding behavior, shoddiest looking materials and construction (bordering on unsafe,) and waste have followed in their explosion of popularity.

Even for the rider they come with major downsides. They “fold” but they are unwieldy and not very well designed for transporting while folded, relying on ineffective magnets or straps to keep them held together. Some of them even require the use of tools to fold and unfold, making them essentially compromised regular bikes.

For these reasons I resisted straying away from my full-size, supremely capable, bicycles that were far more pleasing to my eyes. I didn’t want a compromise. I had owned a late 80s Dahon folding bike, and it was simply not a good bike, even with modern maintenance and upgraded parts. So, I stuck with what I knew for many years of bike riding in cities and on tours.

Enough backstory… isn’t this supposed to be about Bromptons?#

I don’t drive in San Francisco, and even though I have a drivers license I don’t often rent a car when I travel. In the past I’ve gotten around using a mixture of carshares, bikeshares and transit. I have always wanted my own bike on these trips, especially when they are longer than a day or two, but the logistics of it makes that difficult.

I had once had a Dahon folding bike that I could fit in a large suitcase that I would bring between Denver and California on business. It was clunky and barely fit in a checkable suitcase. The brakes didn’t really work well on the steel wheels and the bike itself was heavy. It did get me around though, and I loved it until it was stolen from a corporate apartment. 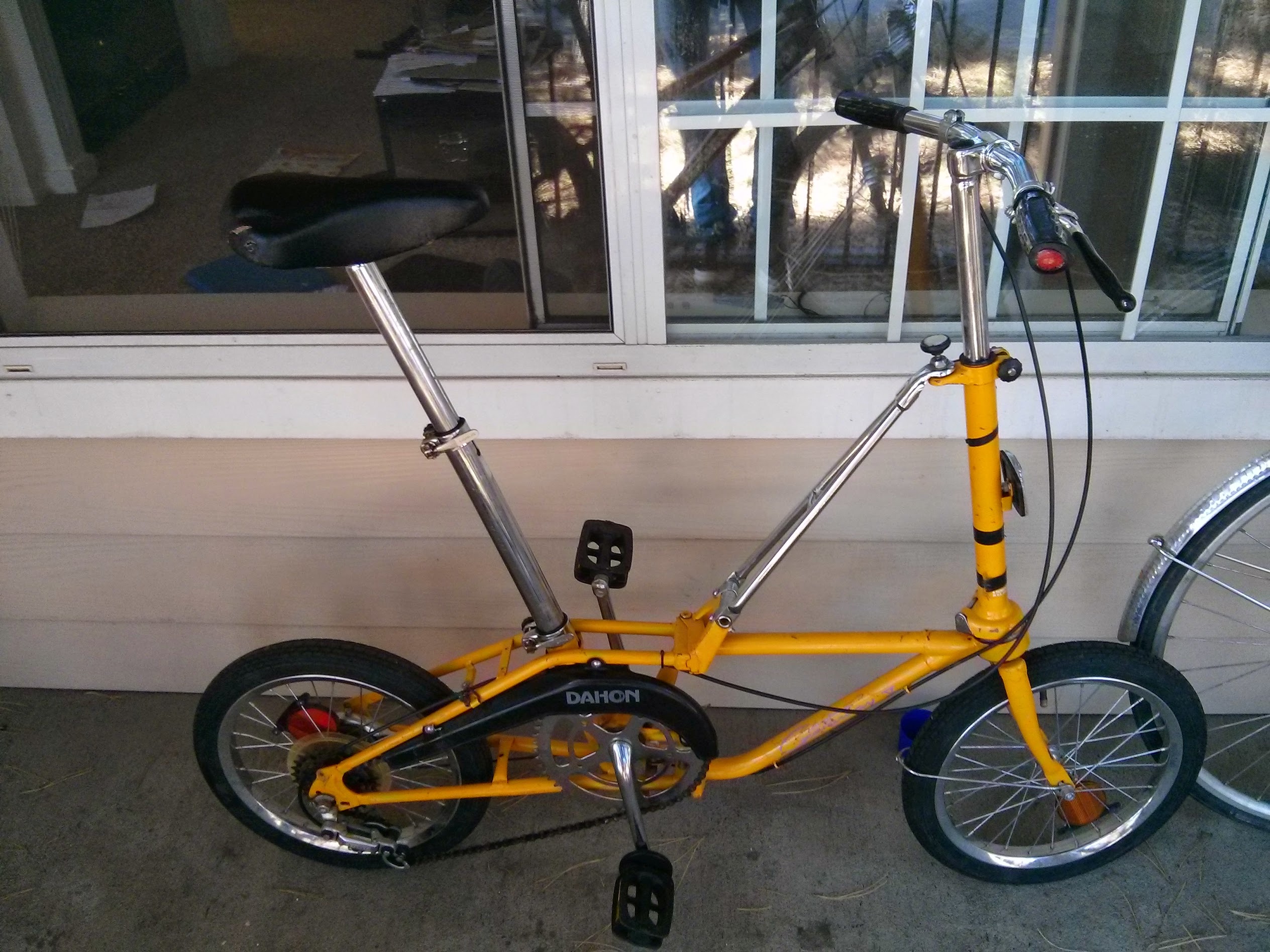 That was back in 2015. Since then, I started lusting after better newer folding bikes like Brompton, Bike Friday, and Tern bicycles, but I had no real justification for one. I had left my consulting job so I didn’t find myself traveling several times a month any longer.

Eventually, I moved to San Francisco and began to ride even more, considering that I was faster than public transit on nearly all occasions. I built the touring bike pictured above and rode it everywhere in the city (and on multiple tours!) while choosing to rent bikes when I traveled to see family or for leisure.

I had a coworker that commuted every day on a bright red Brompton. I would chat with him and wonder how he manages to cover so many miles (nearly 10 miles before catching a ferry into the city, and another mile or so to get to our office) and if the bike was truly comfortable. My coworker swore that he could ride it for 50 miles and feel the same as he would on his other hybrid bike.

This bike had fenders, a rack, and dynamo lighting using a quite nice SON dynamo hub. It was, by all accounts, fully equipped as I would expect any bike used for transport as opposed to sport riding. I was pretty intrigued about these bikes, but they seemed so expensive and I didn’t see one really replacing my main bicycle.

Anyway, I recently I had to take a trip to Portland. It was my first business trip since the beginning of the COVID19 pandemic, and I was excited to see the Rose City. There was just one problem… I needed to get around town when I got there. I only had about a week to plan for the trip, and I really wanted to have my own set of wheels.

I researched bikes that made flying as luggage possible. Of all the folding bikes on the market, there were only two that had any reliable success for owners that flew with them often.

Bike Friday is a US company that came highly regarded, and some of their bikes fit into a suitcase that is also a trailer. Unfortunately, the only dealer for these bikes in SF is by appointment only, and had low stock. Additionally, the Bike Friday bikes must be checked in a bag. They will not fit as a carry-on at all.

Brompton bikes were touted by a number of folks online that seemed to almost make a hobby out of taking photos of their bikes in places you wouldn’t normally think a bicycle could fit. Under train seats. On buses in a variety of ways (including one where a proud owner had made their own backpack-type harness to carry it.) Most importantly: may owners flew with their bike, and they brought it on as carry-on luggage. This was quite impressive, and sent me on a rabbit hole of research comparing options, gearing, color, etc.

I searched local bike shops to see if I could find a Brompton that fit all my needs, and luckily my main local shop was a preferred Brompton dealer and had a number of models in stock. I initially had settled on a basic three speed model, but when I saw a Turkish Green six speed model, complete with the Superlight package and dynamo lighting, I was smitten. After test riding them back to back, the gearing range and good looks of the Superlight model sold me, and I was soon the proud owner of my own Brompton! 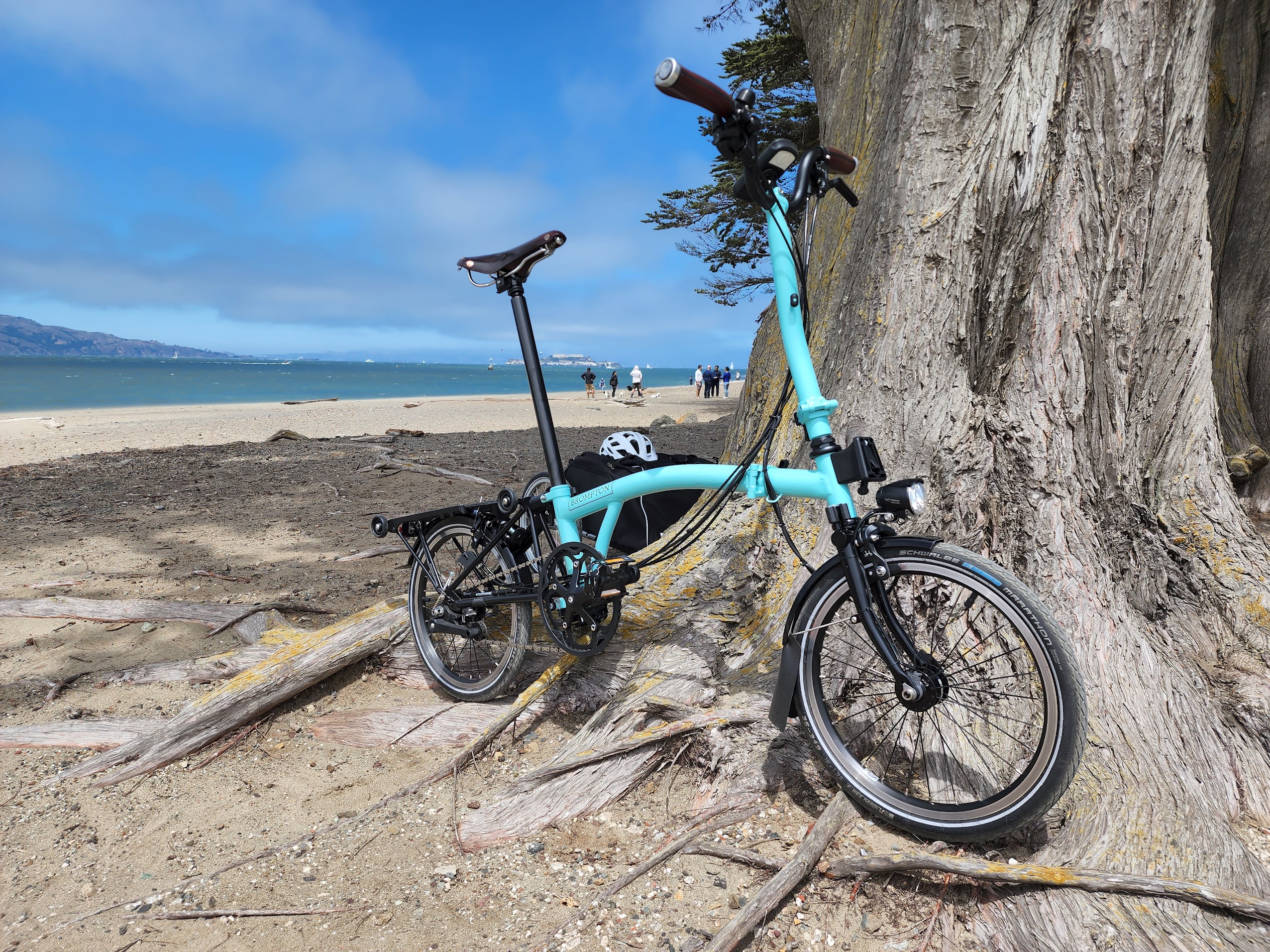 I flew to Portland without a hitch three days later, after much anxiety about whether this crazy plan would work. Setting the bike on the X-ray conveyor belt and then seeing it come off the other end without anyone even batting an eye was mindblowing. Rolling it up to the gate, slipping on it’s packable cover for some minor disguise, and then rolling it onto the plane and putting it right into the overhead bin was nothing short of the coolest and weirdest bike experience I have ever had. All my anxiety melted away; The bike really did fit, and I could now fly with my own bicycle!

With that trip, a wet and very Portlandesque welcome, I spent a week riding around on my own bike enjoying everything the city had to offer, and not once did I need to pay rental fees, or lock it up as it came inside with me. It was miraculously freeing, and combined with the MAX train, I was able to cover a whole lot more ground than I ever expected. It changed my view of travel forever, no exaggeration.

When I returned, I expected to tuck the Brompton away until the next time I needed to fly somewhere. What actually happened was that the Brompton became my first choice of what to ride in San Francisco. The ability to just hop on a Muni bus or train if I wanted to made trips to parts of the city I normally wouldn’t visit much more feasible, and being able to bypass bike restrictions and still follow the rules felt great.

I started to use it to run to grocery store, using the handy front luggage system as a shopping basket. I would take it to ride down to the waterfront and clear my head. It was easier to ride and get ready to ride than my normal touring bike. It was also lighter and more nimble in smaller narrow spaces. It swiftly became my favorite bike to ride in the city.

Very soon after, my partner wanted to try one. She has never been very comfortable on a full size bike, and finding bikes that fit her has always been difficult. She had gotten to hear all about how great I thought my new folding wonderbike was, so we took a trip back to the local bike shop for her to test ride Bromptons for herself. At first she also looked at a six speed model, but found that she vastly preferred the three speed shifting mechanics. We left that day with a matte red Brompton with the shorter M-bars (shorter than my H-bar since she is much shorter) after a short demonstration where the owner of the shop gave her a full overview of how to use and fold her new bike. 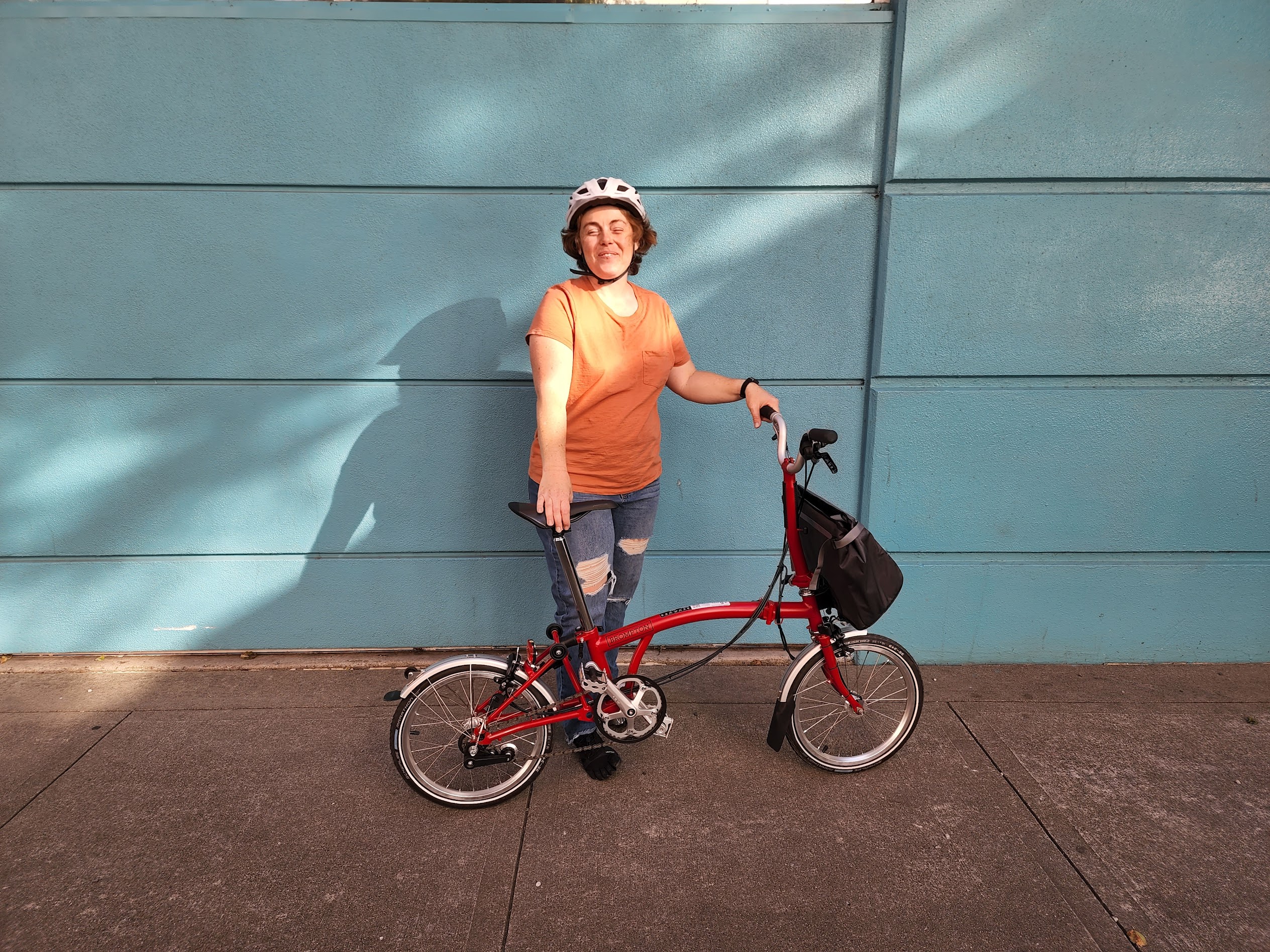 We find these bikes to be so subtly life altering. Now, when we want to go out on the town the bike is the easier option. If we are planning multiple stops that include transit, we don’t have to worry if the bike racks are full, or if we can get on a crowded train. It makes biking the first choice, and they live next to the front door in a pair of Ikea shelf units that feel almost purpose made for these wonderful little bikes. 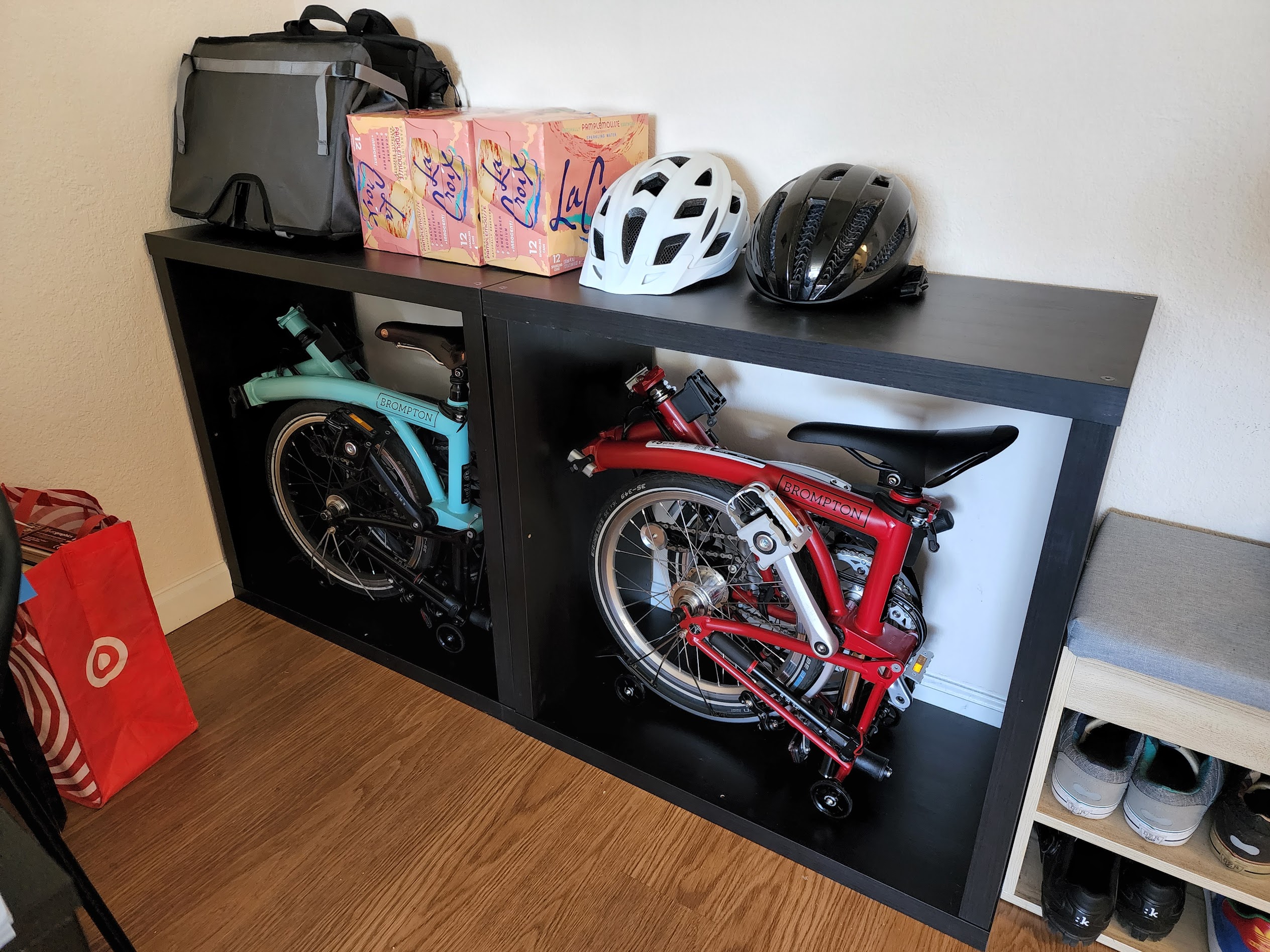 I’ve since added a rack and a specially designed trailer that the Brompton can fit into for stowing on trains or as checked luggage. These accessories make it feasible to do longer touring with a Brompton that would have been inaccessible or difficult to plan with a full size bike. I can’t wait to try it out, and we’ve already used the trailer for some beach day excursions locally. The whole package works so well together that I wish I had considered one earlier, especially before buying one of my other bikes that was meant to be used as a city bike. It now sits on the wall, neglected, sadly.

If you are an urban dweller, frequent traveler, or simply want to get some extra miles with a bike that can live if your trunk at all times, there is nothing better than a Brompton, and I can see why they have amassed a cult-like following. They ride like a normal bike, have appropriate gearing options, look endearingly funky, and fit a niche with a brilliant design that is hard to beat.