This post was edited to add my newest addition, a 60% Keychron K12

When I was a very young child, my father had a workstation issued to him from Digital Equipment Corporation that had my favorite toy: a keyboard. This wasn’t just any keyboard, it was a great big clicky-clacky keyboard, and if you typed something it didn’t like, it would beep at you. This was easily my favorite sound in the world as a toddler. I would beg to play with the “deet-deet,” as I called it.

I grew up with and around computers. My family was the first family I knew that had access to BBSs, and later the World Wide Web and the Internet as we now know it. I had my own first computer, a Toshiba T3200 (with a plasma orange screen, full ISA slots, and my very own 9600baud modem!) with a very plush mechanical keyboard. Later, I had a 486DX and a used IBM Model M I purchased from a hamfest in North Carolina. That Model M keyboard went through at least five more computers with me until something changed.

I had always used really heavy duty peripherals, but one day I purchased my first MacBook Pro. I remember buying that sleek 2009 MacBook Pro and being blown away by the trackpad… and the keyboard. It was the first laptop keyboard that I had used since the T3200 that made me actually want to type on it. The backlighting was phenomenal, even if I didn’t really need it. It was nice to have, and it looked awesome.

Even though I had a very nice Saitek desktop keyboard at the time, itself having a backlight function, I ditched all my old peripherals. My mechanical keyboard was replaced with an Apple Wireless Keyboard, and my trackball was replaced with a first generation Apple Trackpad. It was a clean look.

It felt so perfect, so right. Sure, I had to relearn how to type on the extremely shallow low profile keys but, I thought, this was the way all human interface designs were going. Clearly these are superior in some way or someone like Apple wouldn’t stop offering traditional mechanical keyboards with higher profile switches and keys.

I was right, these low profile “chicklet” keyboards and slick, slim, wireless mice were the way the entire industry would move for most consumer focused devices. Many younger people have never used anything other than touchscreens and low profile laptop-style keyboards. The market has clearly spoken, and the verdict was that bulky was out and thin is in.

With the COVID-19 pandemic and the resulting shift toward remote work and home offices, I worked the vast majority of two years on just a laptop. No external display, no separate keyboard, and no pointing device. Just what was built into the laptop itself. I think I was partly trying to be optimistic about when I would be back into an office. Well, I am still not back in an office and likely won’t be for quite some time, if ever again.

Which brings me to the reason I wanted to write this post. Recently, for the sake of ergonomics and general work productivity improvements I have been redesigning my workspace. I started by upgrading my display to a 5K LG Thunderbolt display, and then I purchased a new Apple keyboard and trackpad to use while sitting at my desk.

That was fine for a while, but I kept having this nagging voice in my head that using what is basically a laptop keyboard while sitting at a desk where portability isn’t a concern seems very silly. I began to research other Mac focused keyboard alternatives, and many of the keyboards for sale that catered to Mac users seemed to be similar to the Magic Keyboard: shallow, very low profile laptop keyboard facsimiles. Mechanical keyboards started entering my search results, and I decided to give one a try after doing my homework and understanding what I was getting into.

I was vaguely aware that certain people had kindled something of a cult following for mechanical keyboards. I pictured many of them as gamers or retro-obsessed folks, but when I started reading and listening to YouTube videos of some of the enthusiasts, I realized that many of them rely on a keyboard day in and day out to make money. Professional copy writers, authors, doctors, lawyers, and particularly programmers.

Listening to various reviews, instructional demonstrations of the different switches, and learning about how to fine tune my keyboard experience opened my eyes to the fact that I could get exactly what I want with the typing experience that I want with relative affordability. It is true that many enthusiasts have mechanical keyboards costing well over $300, and in some cases much more than that. There are sets of keycaps that cost more than a set of Magic Keyboards, for instance. However, there are a plethora of affordable and high quality mechanical keyboards that are fully customizable and include a range of features for under $100!

After weeks of research and weighing the pros and cons of several models, I settled on the Keychron K8. Keychron has a number of keyboard models in all sorts of configurations and sizes. I was able to pick exactly the type of switches I wanted to have installed in my keyboard (I went with Gateron Blue mechanical switches) and on top of that, I can even replace the switches with something else if I find I am less enthusiastic about the loud, clicky, yet very satisfying Blue switches. I could move to silent Red switches if I wanted, for instance. This is possible because the keyboard itself has “hot swappable” sockets for the switches.

If I get bored of the stock keycaps, I have the option to replace them with high quality caps in a number of colors, styles, profiles, and materials. Many of these are quite affordable, as well. I have a set of navy blue and off white keycaps on order as we speak, and I paid around $30.

I’ve been typing on my new mechanical keyboard for the past few days since I received it and I truly cant remember the last time I was so comfortable typing for a full day of work. Even writing this blog post on a Friday night, after working an entire day writing code, is just pure bliss for my fingers. The fatigue I usually feel after a day’s work is gone. Even the sound while typing is enjoyable. Granted, my partner is not as big of a fan of the clicky Blue switches.

These are the same sensory stimulations that I remember growing up with as a child, and then teenager, using a computer. It just feels right. Like putting on a well conditioned baseball glove, or sitting in your favorite leather chair. It’s how a keyboard should feel. If you are on the fence about using a mechanical keyboard, or if you think you have to spend big bucks to get something comfortable and pleasing to use (and frankly, look at) check out some of the more affordable wired and wireless/bluetooth keyboards that are available today. You might feel the same as I do and enjoy typing again. 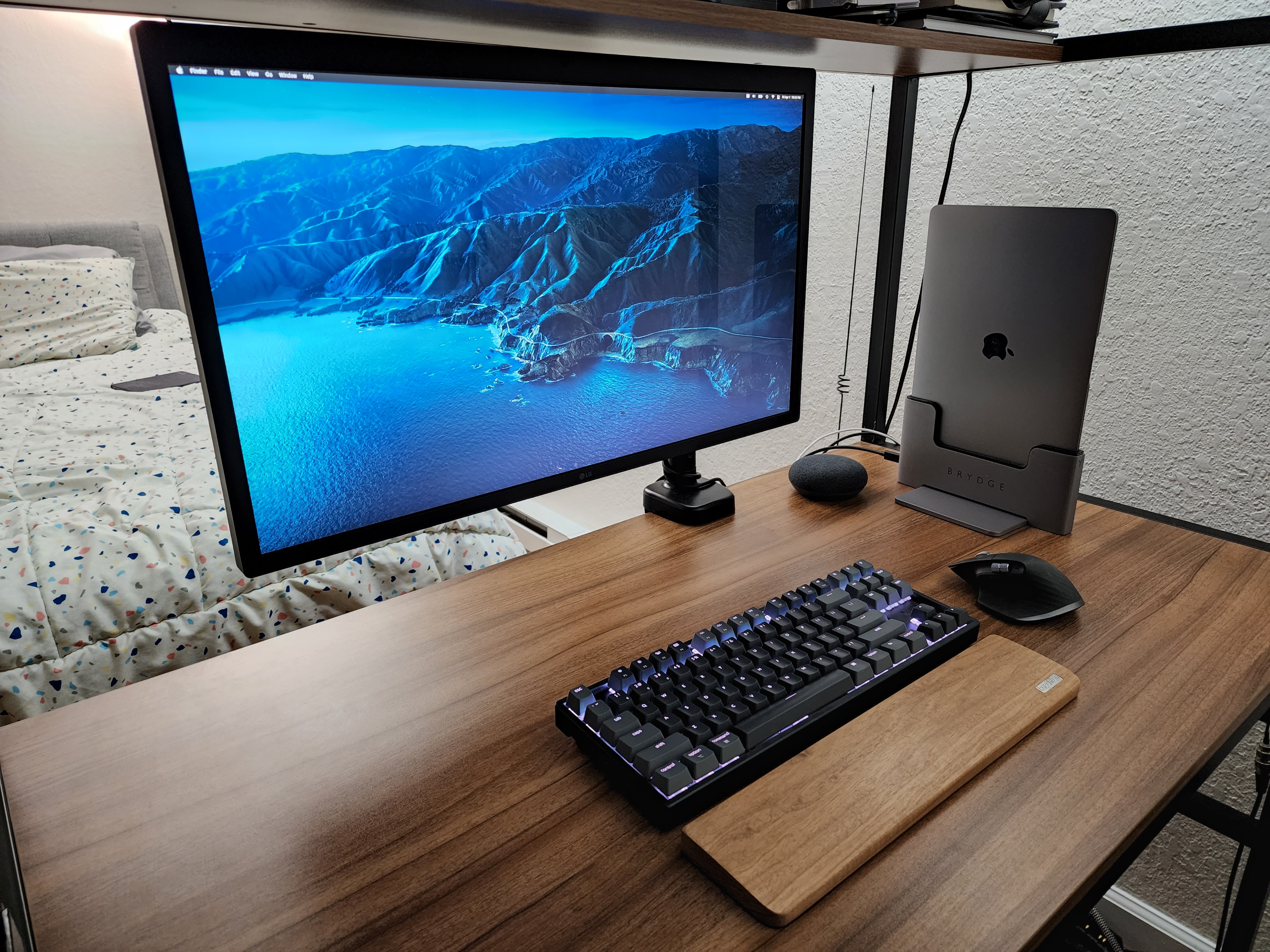 The day after I wrote this post, I swung by Central Computers in San Francisco to pick up an SD card reader and decided to checkout their keyboards just to window shop. I have been so pleased with the Keychron K8 that I decided to try out the K12 model they had on hand. The model they had was outfitted with Keychron Lava Optical Mint switches.

The switches felt absolutely divine. It had a really nice “thonk” sound and a great tactile feel, I was instantly hooked. There was one small downside, though: The K12 is a 60% layout keyboard, which means a number of common keys, including the arrow keys, are only accessible using functional layers (pressing a function (Fn) key is required to access these keys) which has always been extremely intimidating to me.

Long story short, I bought it. I figured that I could use Vim key bindings for the arrow keys and also bind W/A/S/D for another set of arrow options. Other functions seem to be pretty straight forward and I haven’t had any issues over the ~1 day I have been able to really type on it. I already threw the set of blue and white keycaps that I had initially purchased to put on the K8 TKL and it looks phenomenal and feels/sounds even better than it did with the factory keycaps. 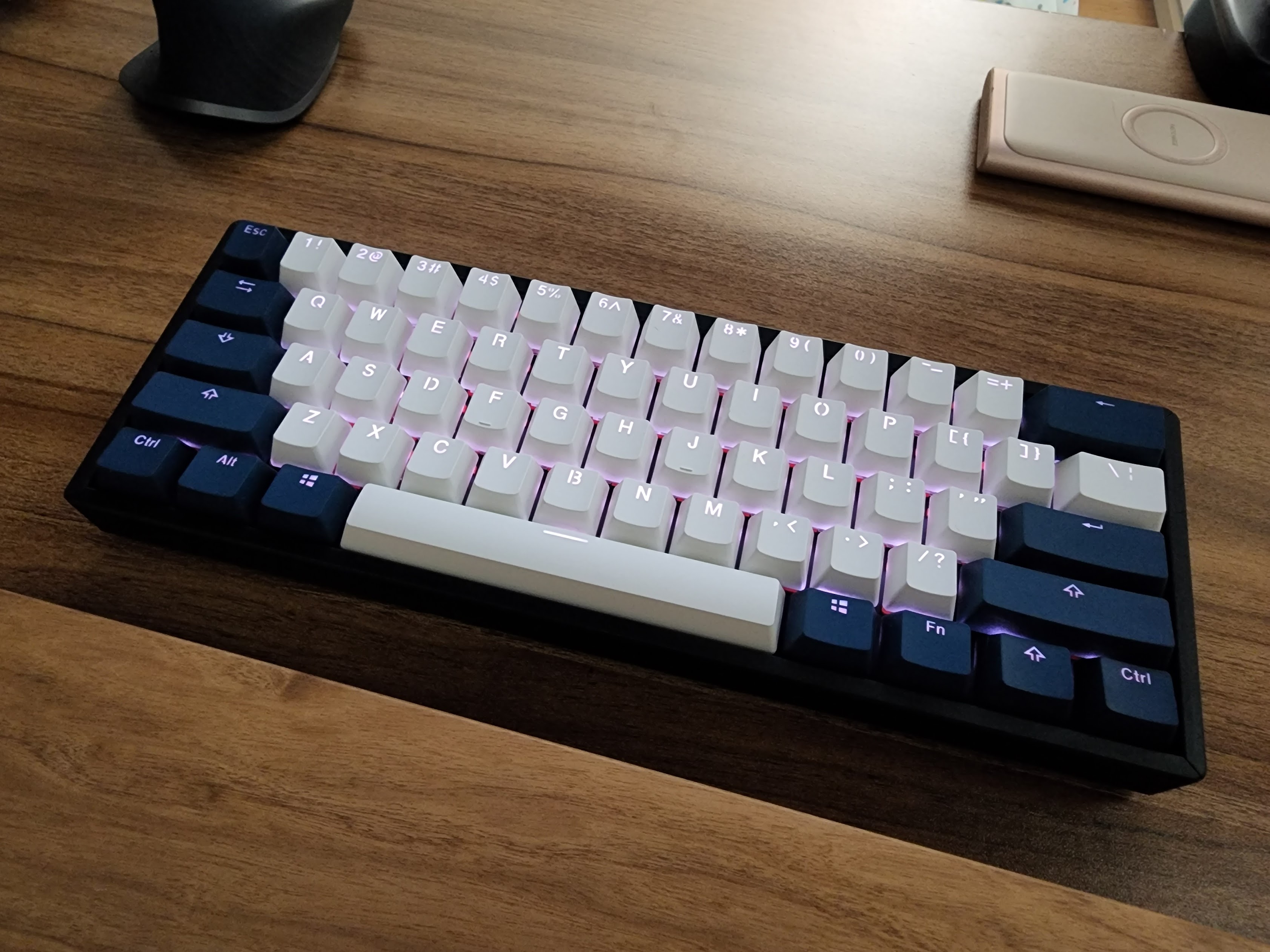 Time will tell if I give up on the novelty factor of using a layout like this. It is a really attractive keyboard, so I see why 60% layouts have become popular recently. I wrote this addendum using it and had no issues using the cursor navigation using the Vim key bindings so maybe it will work out!